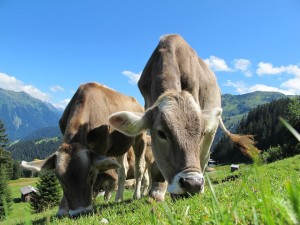 Green meadows, toblerone, pointy peaks and a funny German dialect. A bit different but yet in high esteem – this or something similar is what comes to mind on the topic of the Swiss. Switzerland lies in the heart of Europe but where does it fit? Let’s ask Miriam, a young, 23 year old, student who lives near Zurich.

“I like the basic idea of the EU and it does have many advantages, but I now have to say that I’m happy not to be a part. That being said, Switzerland is a special case to begin with, since there are so many contracts with the EU that we get most of the good and not really the bad, which isn’t really fair either.

“What don’t you have that the EU countries do have?”

“Hmm… probably not, I find it more exciting to go to other countries and have to pay in a different currency. I’m generally against homogenising everything. This is why I’m happy to have foreign currency in my hands”. 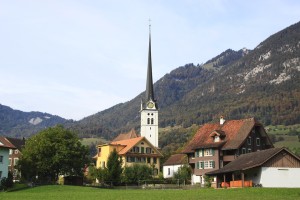 That’s certainly a new way of looking at it which I’ve never heard before; especially since you always have to convert currencies in your head on top of other things that bring disadvantages.

“Yes. Being able to pay in the same currency everywhere probably also has many advantages. On top of that, the Schengen agreement is also a European contract, but Switzerland still profits from it. In addition, the Erasmus programme isn’t being offered in Switzerland. The immigration laws were voted on by the people and Erasmus was part of this as well; they kind of shot themselves in the foot there. On the other hand, a new law has now been negotiated, which is similar to the European scholarship and is being paid for by the state”.

How would you rate the relationship of Switzerland and other countries and the perception of you by EU citizens?

“I do feel like we have somewhat of a special status. I think we sometimes have advantages over other EU countries. When you say you’re from Switzerland, it’s usually seen as a good thing but the Swiss are sometimes also seen as stingy. I’m not sure if that’s because of being an EU member, but it’s probably also due to the good economic situation in Switzerland”.

So you’re part of the European continent but don’t really feel like Europeans, do you? In fact, that’s an attitude which also many EU citizens have.

“No, I mostly feel Swiss. It´s because my passport doesn’t say “Europe”. I’m also against borders but I don’t like when everything is being homogenised… that probably sounds like a bit of a contradiction… What we should say is that we’re part of the world. So following this logic, I should probably also say ‘I’m European’ and not ‘I’m Swiss’”.

So you think it’s bad to say you’re Swiss?

“Yes because I don’t like borders but then consequently probably also the European borders should be abolished. That way you could say you’re part of the world”. 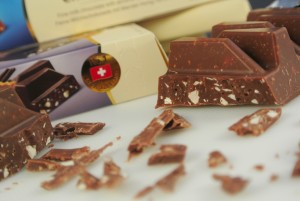 On the other hand, people have to recognise you. Ultimately, we say that we’re German or Swiss because we want to inform others about where we’re from. In that sense you can’t say that you’re from ‘the world’.

What disadvantages do you have from not being part of the EU?

“I’m not sure but I could imagine that it may be easier for EU citizens to get a Visa for certain countries. Ultimately, the union does have a special status and this provokes trust in others, I think.

Technically I’m also an EU citizen because of my Swedish passport. I like travelling with it within the EU, it feels more secure. If there are any complications during my travels, it’s probably easier to solve them as an EU citizen, I think.

Also very important to mention are the postage fees when ordering things from websites abroad, which are much higher than within the EU. Some vendors don’t even deliver to Switzerland outright. As an example, I once ordered something from the UK for 80 Swiss francs and had to pay 30 francs for shipping. When I had to send it back because it didn’t fit, it costed another 20 francs – that really wasn’t worth it”.

Why isn’t Switzerland part of the EU?

“The issue is that Switzerland is a very conservative country, most people are rather right-wing. As a consequence, right-wing politicians don’t like the EU. They predicted that we would have to finance the poorer countries because we have more money, that we’d be exploited. They scared voters before the referendums to join the EU and because fear is the strongest emotion, they were successful with it. There definitely also was the fear of foreign infiltration, of higher immigration and also of the EU taking over regulation of immigration instead of being able to do it themselves. National pride in Switzerland is very big and all this ultimately led to the Swiss voting against joining the EU”.

You’ve already mentioned referendums. Do you think that Swiss citizens are more interested in politics because 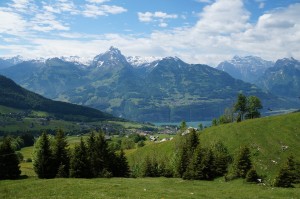 of this special privilege to directly influence policy, at least more than in other countries?

“No, absolutely not. It used to be the case when direct voting rights were introduced, and also when women got the right to vote but I feel that nowadays, people don’t appreciate it. I know many young people who don’t vote. At the moment there are more old people who vote. I think that it’s a shame that the young don’t vote, because it’s their job to take care of their future. It’s a privilege that people just don’t appreciate”.

Thanks for speaking to us!